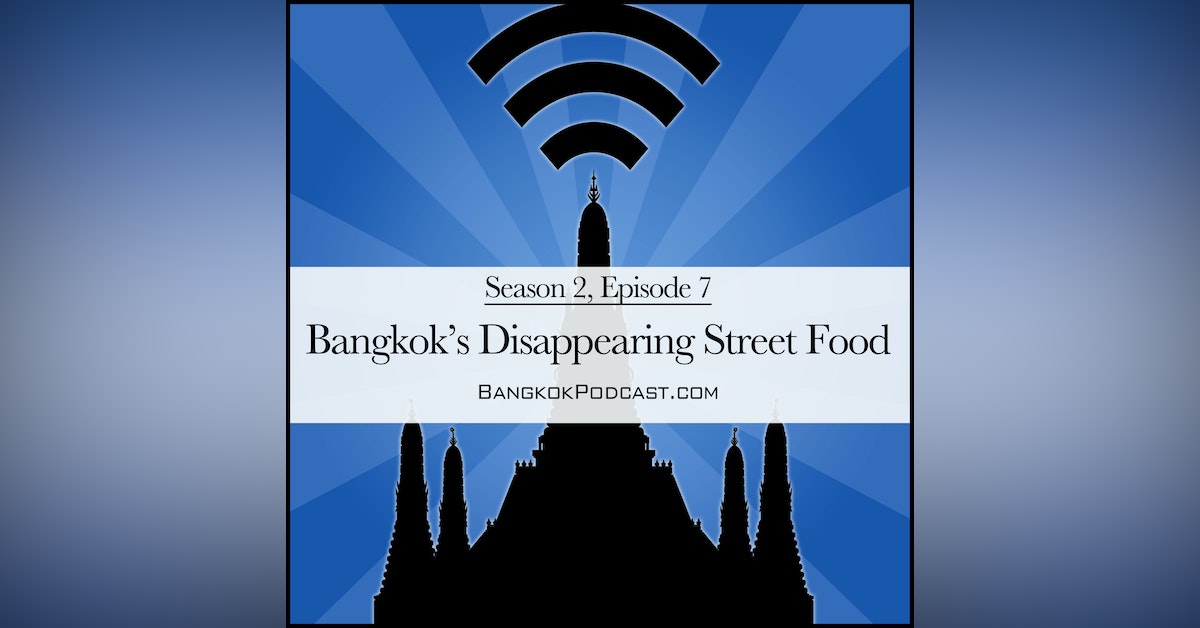 If you’re visiting Bangkok for the ubiquitous street food culture, you might want to get here quickly. There’s seemingly a war on street food vendors in the city. And that’s no jok.

If you’re visiting Bangkok for the ubiquitous street food culture, you might want to get here quickly. There’s seemingly a war on street food vendors in the city. And that’s no jok.

Bear with us this week. Evo’s dealing with a great loss in his family and a broken microphone, and Greg’s a little sleepy from being the dad of a childhood actor. But that’s not what we want to talk about today... This episode is all about Bangkok’s disappearing street food stalls, one of the city’s most famous elements, the lifeblood of many, and part of the city’s undefinable charm. It’s also a perfect time to introduce a new segment on this episode, one we call Love, Loathe, or Leave. That is: how do we feel about sharing sidewalks with street food cards and other vendors cramping our walking style? Are they and the convenience and culinary variety they offer part of why we love living in Bangkok? Do we kind of loathe sharing our space but can tolerate the nuisance? Or do we see them as such a danger to life and limb that we’re ready to leave the country over it? Best line of the show: “It’s called a side-walk, not a side-wok, after all.” But there’s a human cost to consider: What happens to all the people -- tens of thousands -- who’ve made their living vending on the streets, fully sanctioned and licensed by the government? We’re told the vendors will be provided a new place to ply their wares. But will they have the same level of business? And most importantly, what will Greg do for breakfast since he can’t find his favorite jok dealer? To us, this sure seems an issue of ongoing gentrification. Suan Lum night market shut down years ago ostensibly to make way for a development project… that never happened. And then there’s Asiatique, a bright, crowded, new-but-made-to-look-old destination on the banks of the Chao Phraya river. Giant eyesore? Fun destination? Or an example of what the city government wants most of our city to look like when they mark 250th anniversary of Bangkok in just a few years? While Greg’s snarky love affair with Bangkok’s shopping malls is on record, neither of us are street food experts. But Mark Weins from Migrationology and EatingThaiFood.com is an expert on Bangkok street food, so we called him up to get his take. If you're a fellow Bangkokian, tell us what you think about this War On Street Food. Or if you've experienced a similar change in your city, tell us about it. Go to bangkokpodcast.com and leave a comment. Or you can Tweet to us at @bkkgreg or @evoterra. See you next week on The Bangkok Podcast!