Blood on the Highway: Thailand's Seven Deadly Days of Songkran (2.27) 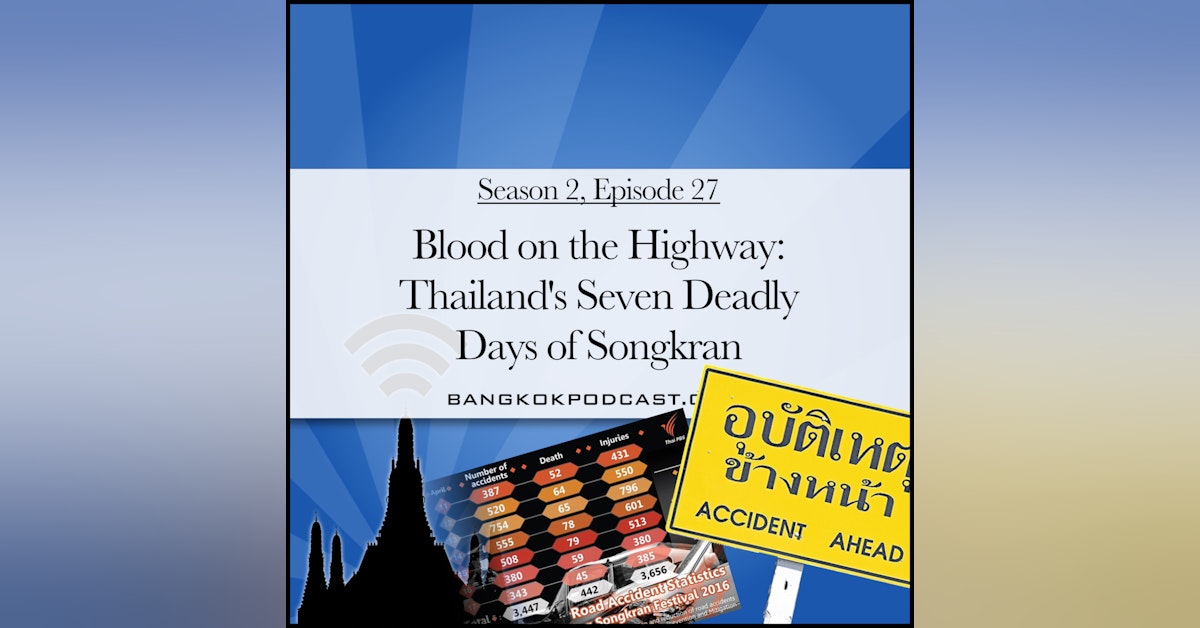 On this episode we talk about traffic in Bangkok - specifically the “Seven Deadly Days” of Songkran - and Thailand's awful road safety statistics. We also talk about what men do with their wives are away... or won't go away. Don't worry...it's not bad

On this episode of the Bangkok Podcast we talk about traffic in Bangkok - specifically the “Seven Deadly Days” of Songkran - and Thailand's awful road safety statistics. We also talk about what men do when their wives are away... or won't go away. Don't worry... it's not as bad as it sounds.

Songkran is upon us, a week-long celebration of Thailand’s new year. What will we be doing during Songkran? Staying off the roads, because it’s also known as the Seven Deadly Days, when road traffic shoots up to three times the normal rate. Yes, that’s likely a contributing factor to Thailand’s hold on the #2 spot in global traffic fatalities per 100,000 people. In an effort to get those crazy numbers under control, Thailand’s military junta announced sweeping changes to vehicle motor code. Effective immediately, police would be issuing fines anyone in any vehicle not wearing a seatbelt, and anyone riding in the back of a pickup truck. And then the very next day -- not surprisingly -- they softened their enforcement language. Perhaps the fact that many taxies have removed seatbelts from the back seat. And a substantial chunk of the population ride in the back of pickups to get to work, into town, to the doctor… And in urban areas, some governmental-sanctioned transportation methods are nothing more than riding in the back of a modified pickup bed, none of which have seatbelts. As it turns out, mandating behavior changes for a country of 65 million people is… messy. Neither of us are so arrogant as to say we have the answers. But that didn’t stop us from offering up some ideas. Got a few yourself? Take a listen to the show (on iTunes, Android, whatever) and tell us if you think our ideas would work or not. And speaking of stupid ideas...

Thailand really, really wants to make us whiter. Something neither of us need. Nor does anyone else, but such is life in Thailand, where it’s hard to buy personal hygiene products that aren’t loaded with whitening agents. And who are these people with super dark armpits? When did that become a problem?

If it’s your first time experiencing The Bangkok Podcast, you really should get our show downloading to your phone automatically every week. If you use iOS, it’s a breeze to listen via iTunes. Android users are be able get the show any number of ways. And for bonus points, leave us a review on those platforms or however you listen to the show. We’d love to hear from you, either on the contact form on our website or through a comment or message on our Facebook page. You can Tweet to the show @bangkokpodcast or follow Greg’s tweets for snarky Bangkok goodness. Evo chronicles his Bangkok adventures on Instagram from time to time, if that’s your thing. See you next time on The Bangkok Podcast!