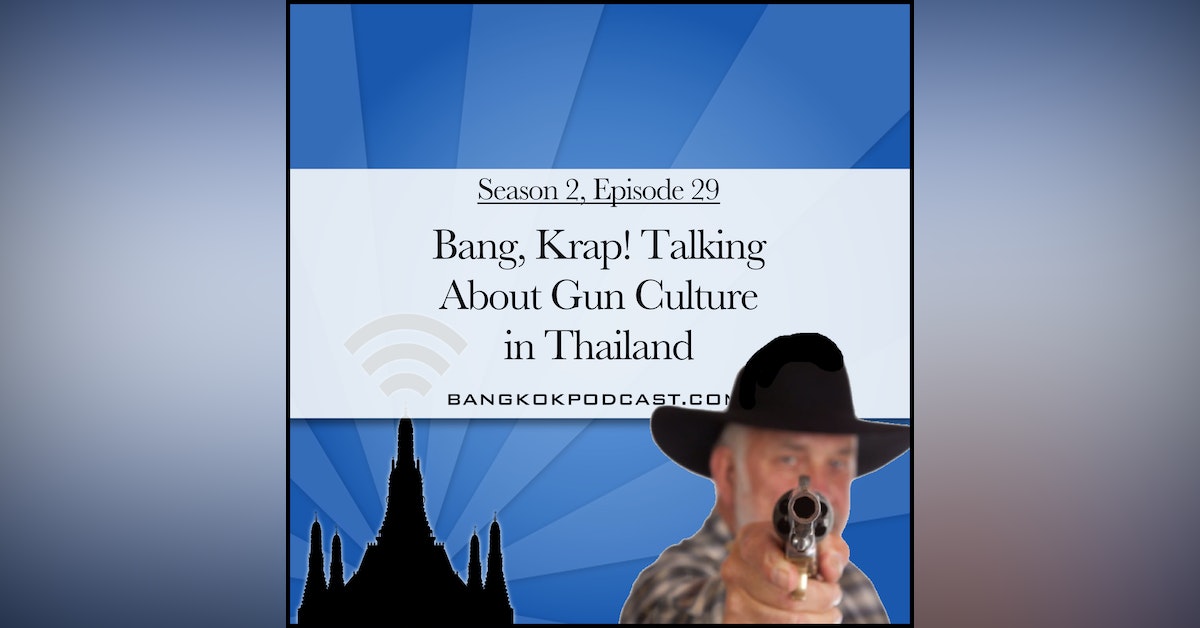 From hitmen to red tape and homemade guns to the black market, we bring in a local expert to help us navigate the murky waters of the past and present realities of gun ownership in Thailand.

From hitmen to red tape and homemade guns to the black market, we bring in a local expert to help us navigate the murky waters of the past and present realities of gun ownership in Thailand.

We know you want us to weigh in on the issue of Bangkok’s impending street food ban, but not today. We need to let things settle down before we offer up our opinion on the matter. Instead, we’re going with the safe topic of the right to keep and bear arms -- guns in Thailand. Though the two of us -- Canadian and American -- grew up with firearms, we aren’t familiar at all with the reality of the gun culture of Thailand. Khun A, however, has a considered opinion and is is our guest today. He’s a Thai national and avid gun aficionado, owning several weapons and is a member of the IDPA. We wanted to really understand Thai gun culture from a Thai point of view, and he’s the expert we needed to chat with. Just how big is the Thai gun culture? Well, Thais may not be a gun crazy as 2nd amendment-loving Americans, but it certainly exists. There are shooting ranges, gun clubs, and firearm stores all over Bangkok and the rest of Thailand. But just like any imported good, gun owners pay a premium for the privilege of ownership, with prices several hundred percent higher than other countries, thanks to import duties and other taxes levied by Thailand’s government. Anytime you have skyrocketing prices, you have a black market that seeks to get around them. So yes, you can buy guns illegally -- even illegal assault rifles -- in Thailand. Worse, you can buy “homemade” guns. But think less gunsmithing and more gee-I-hope-this-doesn’t-blow-up-in-my-hand type construction. Of course, you can’t have a conversation about guns without talking about gun violence. While getting accurate numbers specific to gun violence in Thailand are notoriously had to pin down, Khun A sheds some light on Thailand’s hitman history from the ‘60s and ‘70s, which shockingly still exists today. Perhaps more surprising is the notated lack of a cohesive and vocal anti-gun community in Thailand. No, not everyone is pro-gun, but the voice of those who want them banned is rather quiet. Perhaps that’s because Thailand’s red tape processes to actually own a gun are seen as enough of a deterrent? If the four- to six-week waiting period isn’t enough, perhaps asking your employer for permission to own a gun does the trick? We’re not sure why the Ministry of Interior needs to see your bank records before issuing you a permit either. But such is life in Thailand. But here’s the good news: Gun responsibility is preached at every step of the process. As much as headlines may make it seem like it’s the wild, wild west over here; the laws definitely don’t do much to protect you if you are forced to use one in self defense. Khun A’s description of what happens after what seems like a justifiable use of deadly force should make anyone carefully consider their actions. (Spoiler: It’s murder.)

We covered the shadow recently, but let’s get to the root of the problem: the 15 to 1 ratio between customer and retail employee. What’s up with that? And how do we feel about the perceived overstaffing in just about any retail establishment in Bangkok? You’ll have to listen to find out if it’s something we love, loathe, or hate so much we’re ready to leave Bangkok.

If it’s your first time experiencing The Bangkok Podcast, you really should get our show downloading to your phone automatically every week. If you use iOS, it’s a breeze to listen via Apple Podcasts. Android users are be able get the show any number of ways. And for bonus points, leave us a review on those platforms or however you listen to the show. We’d love to hear from you, either on the contact form on our website or through a comment or message on our Facebook page. You can Tweet to the show @bangkokpodcast or follow Greg’s tweets for snarky Bangkok goodness. Evo chronicles his Bangkok adventures on Instagram from time to time, if that’s your thing. See you next time on The Bangkok Podcast!