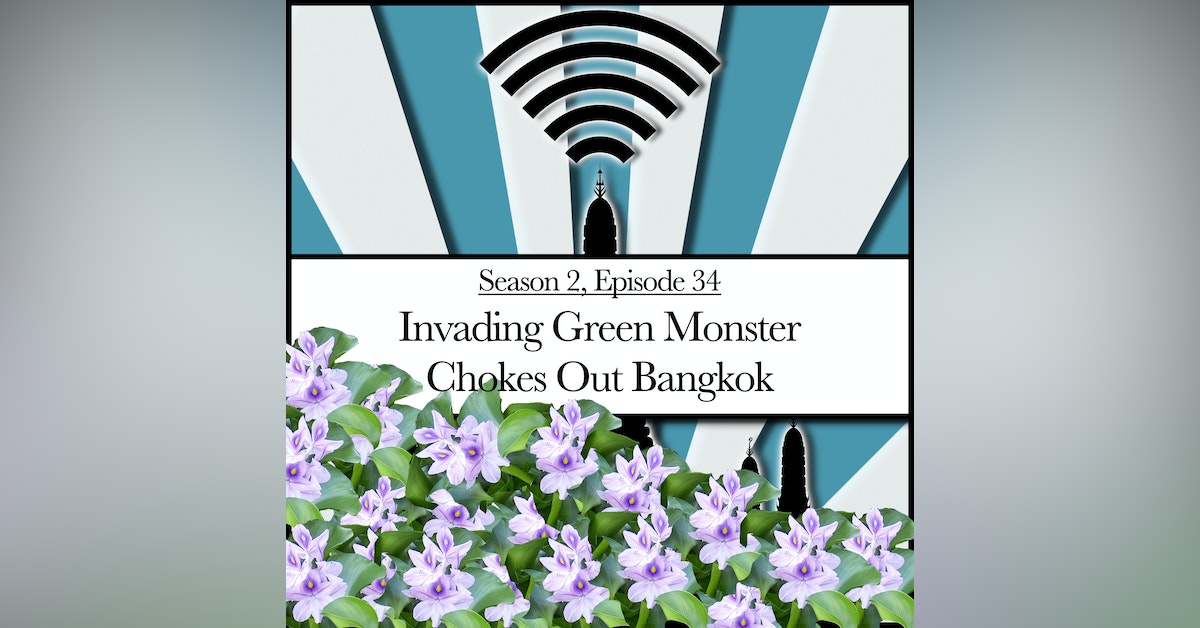 One of Thailand's most persistent pests - the beautiful but invasive water hyacinth is once again clogging Bangkok’s waterways. And while Evo didn't die on a motorbike just yet, a friend of his is in the hospital after his scooter accident.

One of Thailand's most persistent pests - the beautiful but invasive water hyacinth - is once again clogging Bangkok’s waterways. And while Evo didn't die on a motorbike just yet, a friend of his is in the hospital after his scooter accident. Maybe he’s rethinking his chosen mode of transport?

Motorbike accidents happen. Though this is Thailand, and Thailand holds the ignominious title of deadliest place to ride a motorbike. Last week the inevitable happened to a fellow expat here in Bangkok, though thankfully on a low-speed collision. Will it impact Evo’s decision to ride? You’ll have to listen to find out. But really, that’s not what we’re here to talk about. The Chao Phraya these days is a little more green than usual. Which sounds good, until you realize the green is from huge, floating islands of plant matter. It happens every year, and we’ve always wondered what it is. Evo took it upon himself to dig deep and has learned a few things about phak tob java, or water hyacinth as it’s commonly known, or Eichhornia crassipes as it’s known to botanists.

Finally, when you fully understand the complexity of the problem, you’ll see why water hyacinth is the perfect metaphor for Bangkok’s bureaucracy. That was meant to be funny, but...

If you’ve only uttered “Hey Dude, where’s my car” when referencing a cult-classic from the turn of the century, you haven’t left your car -- or your motorbike -- in a parking lot in Bangkok. It’s a little maddening. The only good news is that your bike probably isn’t stolen. Probably. Listen in to find out how we feel about this totally alien concept to us two expats who’ve been trained to set the parking brake and -- obviously -- take the keys. But it’s not like that stops people from moving your ride.

If it’s your first time experiencing The Bangkok Podcast, you really should get our show downloading to your phone automatically every week. If you use iOS, it’s a breeze to listen via Apple Podcasts. Android users are be able get the show any number of ways. And for bonus points, leave us a review on those platforms or however you listen to the show. We’d love to hear from you, either on the contact form on our website or through a comment or message on our Facebook page. You can Tweet to the show @bangkokpodcast or follow Greg’s tweets of snarky Bangkok goodness. Evo chronicles his Bangkok adventures on Instagram from time to time, if that’s your thing. And as mentioned, we now have a LINE account! Yep. Just for the Bangkok Podcast. Join us over there, too! See you next time on The Bangkok Podcast!