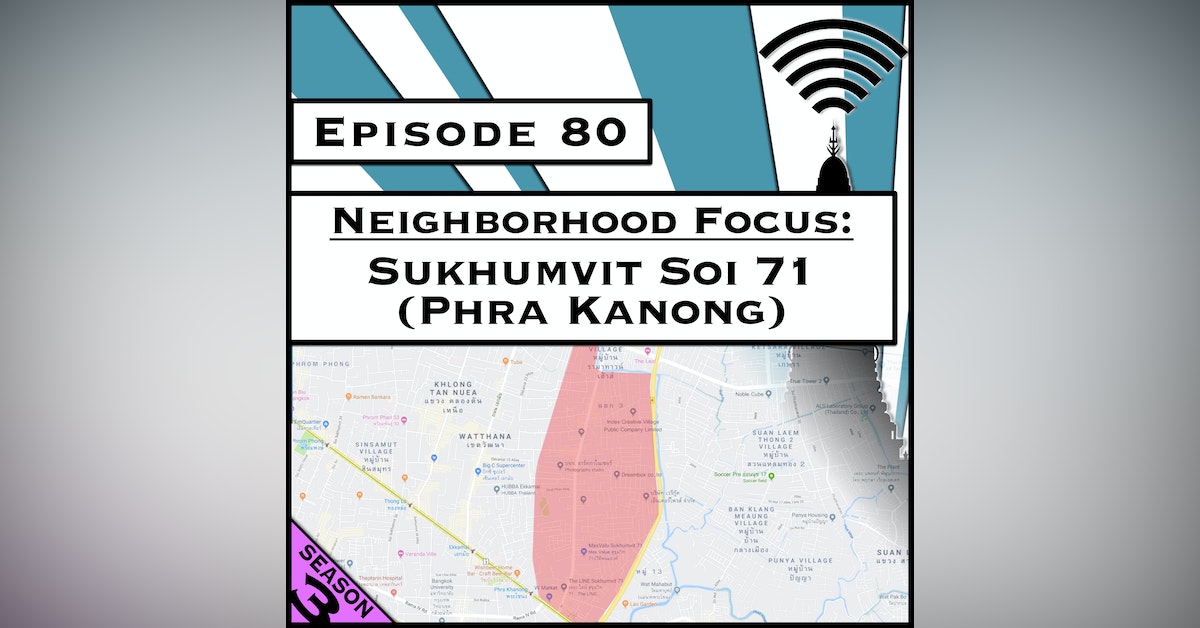 Big News: This show will be the final episode of Season 3! We figure 80 episodes is the right number given the length of previous seasons, so the Bangkok Podcast will be taking a week off next week before commencing Season 4, which will include a few...

Big News: This show will be the final episode of Season 3! We figure 80 episodes is the right number given the length of previous seasons, so the Bangkok Podcast will be taking a week off next week before commencing Season 4, which will include a few interesting changes to the show. (Spoiler Alert: Ed is coming back, woo hoo!)

And a quick note - if you want to read the esoteric-yet-fascinating Harvard study on Bangkok’s khlongs that we talk about in the show, you can get it here.

So in the last show of the season, the boys venture out to explore the ‘Phra Khanong’ area, which includes Sukhumvit Soi 71 (aka Soi Pridi Banomyong) and the area immediately around the Phra Khanong BTS station. Why Phra Khanong? Well, it turns out the area is in the news this week, as it was named the 12th coolest neighborhood in the world by Time Out Magazine! Greg and Ed were so surprised by the designation that they ran out, met up with a buddy who lives in the area, and checked it out. This episode is their report.

Beginning at ‘W District’, they sample the excellent outdoor food court and beer garden in the back, as well as a number of cool restaurants and cafes dotted throughout the complex. The soi immediately behind W District, Pridi Soi 3, is an eclectic mix of bars, small restaurants, barbershops, clothes shops, karaoke parlors and massage places, with its own personality.

As for the side sois off of Soi 71, despite walking up and down and in an out, your hosts struggled to find interesting places to hang out, but perhaps it was the evening hour. That being said, the entire area was bustling with activity and all of the small Thai restaurants and shops were fairly busy. The guys did manage to find a cool little cocktail bar called Clouds Across the Moon on Pridi Soi 14, cheaper than the ‘mixology’ joints on Thong Lor and Ekkamai but just as delicious. Pridi Soi 2 also proved interesting with many street restaurants, an Irish hole-in-the-wall pub, and a fun looking Mexican restaurant with great drink specials.

Although both Greg and Ed liked what they saw and consider the area (especially W District) worth a visit, they were a bit amiss as to why (or how) this area got ranked so high on TimeOut’s list. But who knows, maybe the guys just aren’t cool enough to know cool when they see it. :)