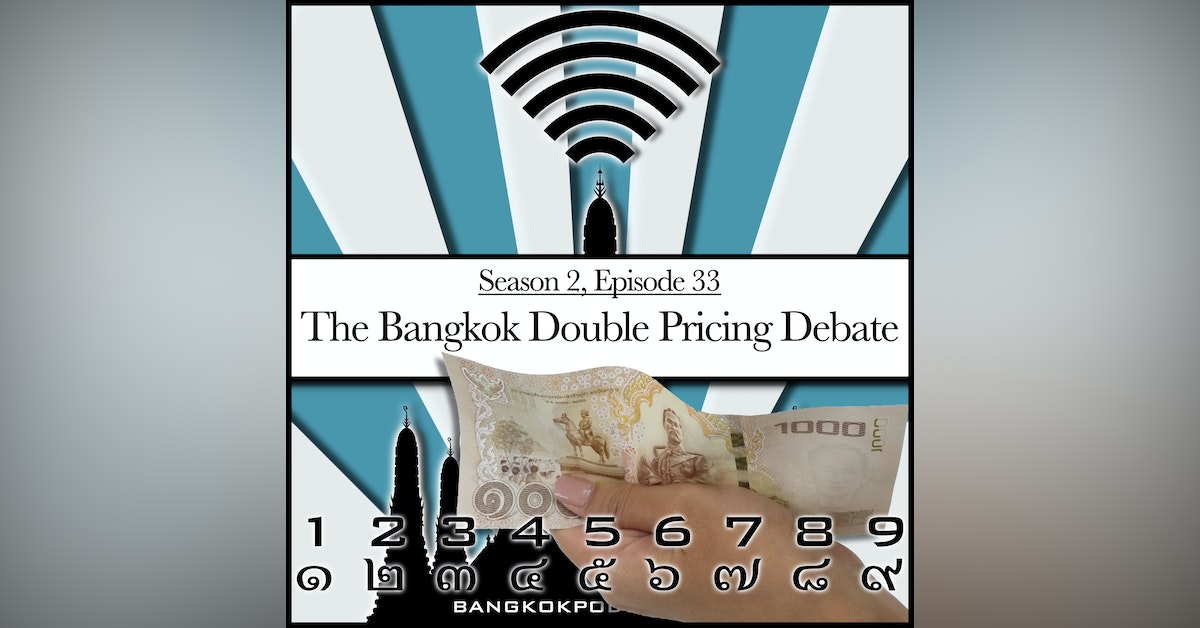 "On this episode we get into one of Thailand's most contentious topics - double pricing. But first Evo discovers a hidden hipster hideout, and by “hidden”, we mean new to Evo. Also Greg attempts to lose his child in a giant plastic bubble bath.

On this episode we get into one of Thailand's most contentious topics - double pricing. But first we talk about selfies in a ball pit and a hidden hipster hangout.

Just down the road for us on our side of the river is a hidden hipster hideout in Bangkok called called The Jam Factory. And by “hidden”, we mean new to Evo. Because it’s pretty well known by everyone other than him. Also Greg visits Central Embassy and attempts to lose his child in a giant plastic bubble bath filled with selfie takers. But as interesting as both of those topics sound, neither are what we’re talking about today. Let’s just get this out of the way: We think double pricing sucks. Thailand is notorious for pricing things like museums, national parks, landmarks, and other civic works differently depending on where a visitor was born. Foreigners -- we stand out a bit -- pay an inflated price, where Thai nationals pay much, much less. Sometimes Thai nationals pay nothing at all. As representatives of the foreigners overcharged, we don’t like it. But we try to understand the rationale for it on this week’s episode and present their side. We’re not sure we did a good job. But here are the excuses main arguments most often offered to justify dual pricing in Thailand:

All of those are valid concerns. However, we’re not buying it. Listen in to learn how we carefully (and hopefully respectfully) dismantle each of those excuses arguments. And though we try very hard not to push our own agenda on our adopted country, here’s what we think could be the consequences if the dual pricing issue isn’t addressed (which it hasn’t been for decades, we get it.)

Now, hopefully we didn’t go overboard on complaining. It’s not what we set out to do. And if you have a different opinion, we invite you to leave a comment below or on our social channels. Let’s keep the conversation going. One great way is our new LINE account, just for the Bangkok Podcast. Hey, we’re in Thailand, and LINE is huge here. So of course we have a LINE account. Follow along and talk to us there, too!

Almost half a year ago, we talked about Bangkok’s “saluting security guards” in an early LLoL segment. But Greg forgot something key to the conversation that Gregory Hines would be proud of. Listen in to find out why we’re being so mysterious, and whether or not this clicks for us. (Heh.)

If it’s your first time experiencing The Bangkok Podcast, you really should get our show downloading to your phone automatically every week. If you use iOS, it’s a breeze to listen via Apple Podcasts. Android users are be able get the show any number of ways. And for bonus points, leave us a review on those platforms or however you listen to the show. We’d love to hear from you, either on the contact form on our website or through a comment or message on our Facebook page. You can Tweet to the show @bangkokpodcast or follow Greg’s tweets of snarky Bangkok goodness. Evo chronicles his Bangkok adventures on Instagram from time to time, if that’s your thing. And as mentioned, we now have a LINE account! Yep. Just for the Bangkok Podcast. Join us over there, too! See you next time on The Bangkok Podcast!