Time for Change: Should Begging Foreign Backpackers Take a Hike? (2.28) 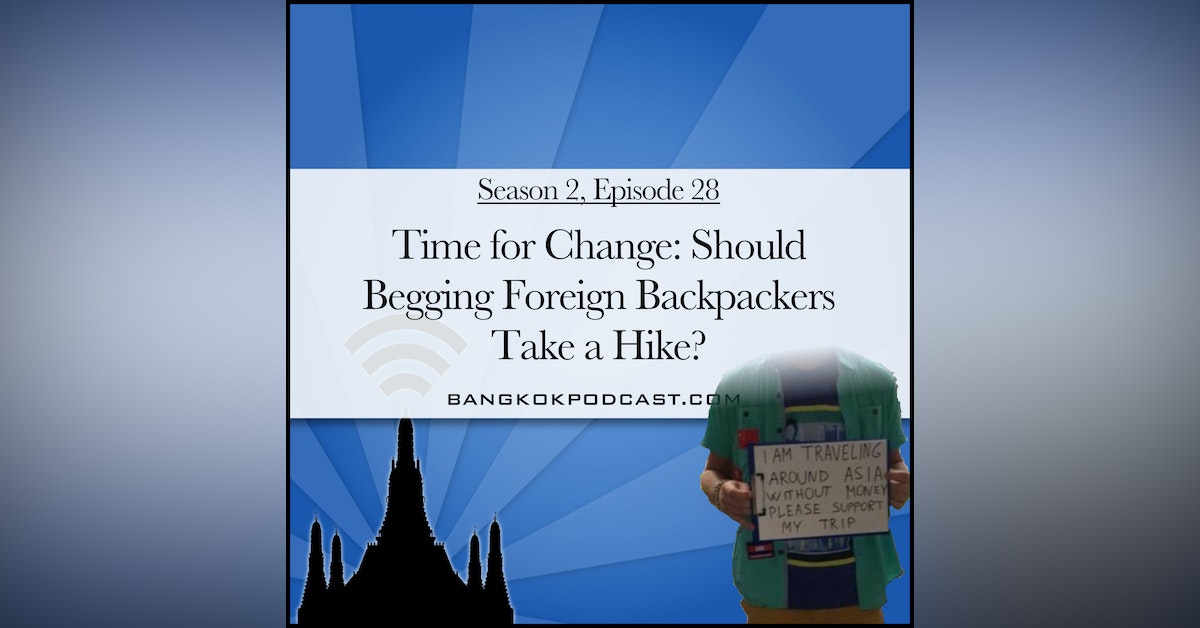 You may have seen foreign backpackers on the streets of Bangkok, playing instruments, selling trinkets, or simply asking for change. Should these begging vagabonds take a hike, or do they deserve some leeway to, er, find their way?

You may have seen them on the streets of Bangkok, Singapore, or Hanoi. Many play instruments, juggle, or sell postcards. Some simply stand there with a hat and a sign asking for pity. We're talking, of course, about the round-the-world adventurer looking for a handout. Should these begging vagabonds take a hike, or do they deserve some leeway to, er, find their way? We also talk about staying dry (or attempting to) during Songkran, and Greg's foot fetish (in that he'd really like to be able to find shoes to fit his giant feet).

The story has been tearing up the newspapers and internets lately - the foreign backpacker. Usually white, European/North American, usually with scraggly bears, matted hair, and doing their best to trade a skill for a bit o' spare change, their presence inspires anger and pity in equal amounts. But they are nothing new. Indeed, as far back as 10 years ago, Greg remembers seeing the first 'famous' farang backpacker as he sat there with a sign begging for help to buy his plane ticket back home, as group after group of university students passed by and dropped some hard-earned cash in his hat. "That's nice," thought Greg. But then Greg saw the same guy in a different part of the city. Then another. Then another. Then it dawned on Greg - this guy was a scammer. But now farang beggars are much more common. Many offer legitimate - if not entertaining - services, such as selling handmade wares, playing an instrument, or doing some tricks. But should they even be doing it? In a region as poor as Southeast Asia - where real poverty is an every day issue for far too many - is it really proper for able-bodied, western-educated foreigners, likely with a healthy support network back home, to be begging for scraps to fund their adventures? Greg and Evo argue the pros and cons, and come up with more cons than pros.

We think it's safe to say that Bangkok's street food scene would not be as creative (and delicious) as it is without the, er, less-than-stringent food safety ecosystem that many of us westerns are used to. We posit that a food safety inspector from, say, Canada or the US, would have a stroke if he saw how food is prepared here, but should he maybe loosen up a bit? Greg and Evo discuss the safety (and sickness) of street food, and if the lack of regulation is something that helps or hinders eating out.

If it’s your first time experiencing The Bangkok Podcast, you really should get our show downloading to your phone automatically every week. If you use iOS, it’s a breeze to listen via iTunes. Android users are be able get the show any number of ways. And for bonus points, leave us a review on those platforms or however you listen to the show. We’d love to hear from you, either on the contact form on our website or through a comment or message on our Facebook page. You can Tweet to the show @bangkokpodcast or follow Greg’s tweets for snarky Bangkok goodness. Evo chronicles his Bangkok adventures on Instagram from time to time, if that’s your thing. See you next time on The Bangkok Podcast!