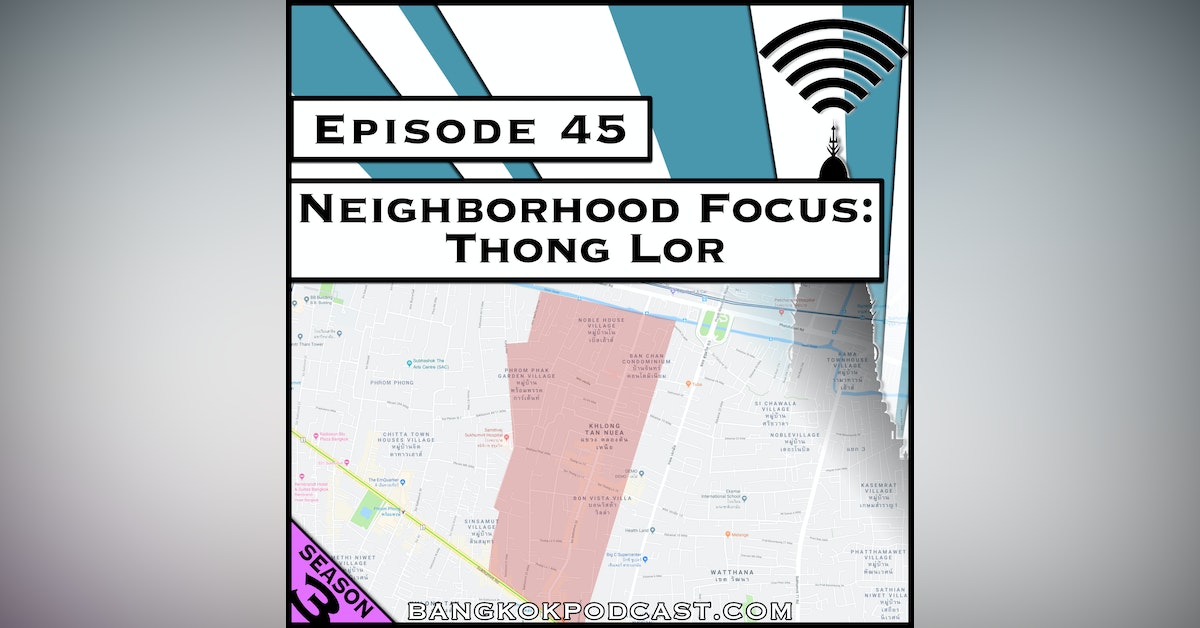 In a return to ‘Neighborhood Focus,’ Greg and Ed dive into the jam-packed area surrounding Sukhumvit Soi 55, aka Thong Lor, describing a recent night out they planned in order to give them a refresher on the quickly-evolving area. At the beginning...

In a return to ‘Neighborhood Focus,’ Greg and Ed dive into the jam-packed area surrounding Sukhumvit Soi 55, aka Thong Lor, describing a recent night out they planned in order to give them a refresher on the quickly-evolving area.

At the beginning of the soi near Thonglor BTS, Ed sings the praises of Hummus Boutique while Greg emphasizes the excellent street food and, on the other end of the cost spectrum, the rooftop bar Octave at the Marriott on Soi 57. Wotta view!

Before entering the soi proper, the guys prepare themselves for ‘Little Japan’ (as Greg calls it) due to the shocking number of Japanese restaurants in the area, that their friend Paul (longtime resident of Thong Lor) said numbers over one hundred! The boys next discuss the plethora of expensive condos throughout the Thong Lor area and where to find some deals, as well as the multitude of mini-malls, like Eight Thonglor or hipster hangouts Seenspace and the Commons.

Speaking of hipsters, Greg points out a bunch of premium cocktail bars including Just A Drink Maybe and J. Boroski, one of his favorites - if you can find it. Greg and Ed continue down the soi giving their thoughts on favorites old and new, including Sway, Iron Faeries, Bad Motel, Shades of Retro, Nothing But the Blues, and Game Over, noting that the one thing that makes each of these places a winner is their effort to do something new, rather than go the ‘more of the same’ route that so many beer bars tend to go for.

But it ain’t all wine and pastries - Thong Lor has its negative elements too, which Greg and Ed discuss, although ultimately, the area comes out on top as one of Greg and Ed’s favorite areas. Suffice it to say, if you have the dough, there are definitely enough food and drink options on Thong Lor to keep you busy for a lifetime.