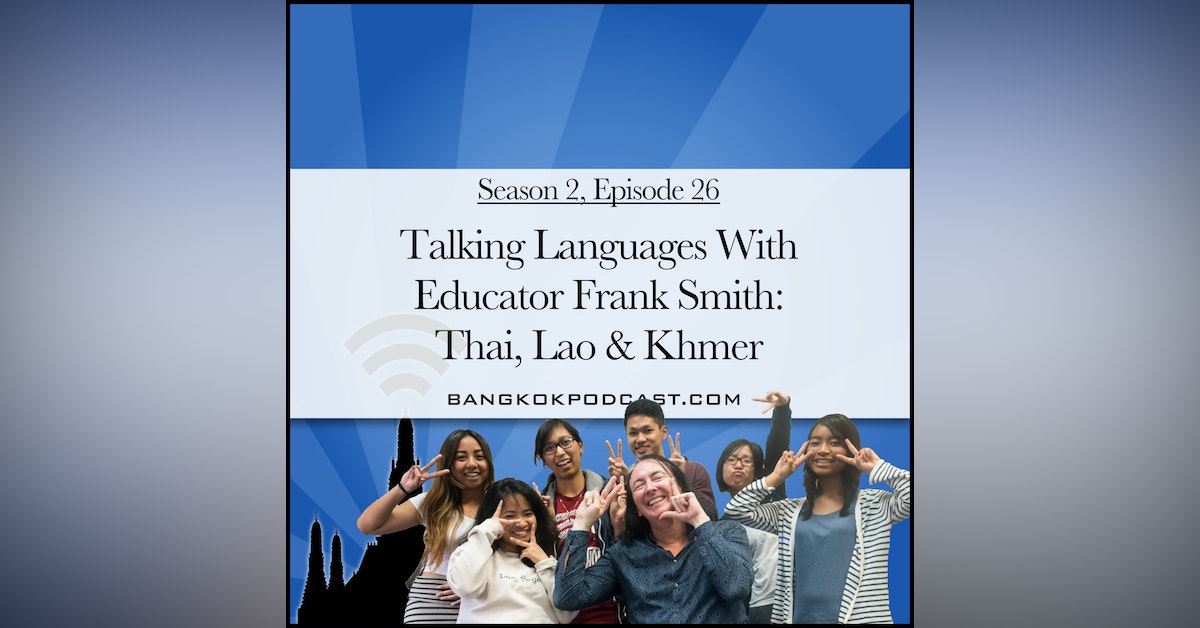 On this episode of the Bangkok Podcast we talk languages with Frank Smith. He speaks Thai, Khmer, and Lao, and teaches Khmer at UC Berkeley in California. Add to that a quick conversation on the pros and cons of raising a kid in Thailand, and we're done!

We start the show with an easy question: Is Bangkok the kind of place you want to raise a kid? Greg is facing the reality of doing so right now, and Evo has sage advice from someone who decided not to raise a kid in different City of Angels some 20 years ago. Everyone loves a good mystery. And everyone loves a good origin story. But when it comes to the people who live in Cambodia, Thailand’s neighbor to the east, the origin story of their language -- Khmer -- is a complete mystery. Oh, and it’s even harder to learn than Thai. Go figure. Our guest this week is Frank Smith, a language professor at the University of California Berkeley. Frank’s students are often of Cambodian descent, having been raised abroad by displaced parents. Their goal is to reconnect with their heritage, in some cases learning to speak, read, and write in their native language… from a white guy. A white guy who has been speaking, reading and writing Khmer for 30 years, though. With a bit of flair, we think you’ll agree. And if you’re ready to study Khmer, he can help! He passes along several interesting facts to Bangkokians like ourselves, like busting the myth that the languages native to this part of the world are based on Sanskrit (they aren’t), and that the “Khmer” spoken in Thailand bears little resemblance to the actually Khmer spoken in Cambodia. What does Frank think of our opinions on whether or not foreign workers should bother to learn the local language in SE Asia? His answer just may surprise you.

It’s a listener suggestion this week from our friend Tim, another Bangkok expat. The topic? April. Yes, the month. Is this nutty month marked by oppressive heat and a state-sanctioned water fight something we love, loathe, or are ready to leave over? Listen to find out. Spoiler: it’s a split decision.

If it’s your first time experiencing The Bangkok Podcast, you really should get our show downloading to your phone automatically every week. If you use iOS, it’s a breeze to listen via iTunes. Android users should be able get the show automatically through Google Play. And for bonus points, leave us a review on those platforms or however you listen to the show. We’d love to hear from you, either on the contact form on our website or through a comment or message on our Facebook page. You can Tweet to the show @bangkokpodcast or follow Greg’s tweets for snarky Bangkok goodness. Evo chronicles his Bangkok adventures on Instagram from time to time, if that’s your thing. See you next time on The Bangkok Podcast!